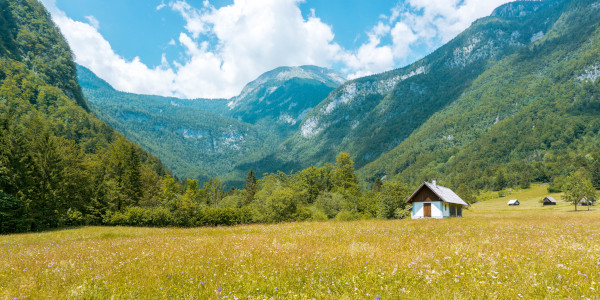 Mostnica is an Alpine river that flows through the Voje Valley, creating waterfalls and gorges before ending in the village Stara Fužina. Visiting the gorge and the valley is a must-do during your stay at Lake Bohinj in Slovenia. The nature along the trail is very beautiful and best of all: the trail is easy. It starts at the gorge, continuing through a very picturesque valley and ends at a waterfall. In this blog post, I’m sharing everything you need to know about visiting the Mostnica Gorge and the Voje Valley.

The gorge starts in a forest with moss-covered trees and lots of greenery. At this point the crystal-clear river is very narrow and carves through the rocks. At some places the gorge is 15m deep. It’s beautiful to see what water can do to rocks! Further along the trail, the river broadens up and becomes accessible. You can even get down to the river and sit on one of the rocks. I saw a lot of people sunbathing on the rocks when I was there. Be cautious though, the rocks can be slippery. There’s a footpath on both sides of the gorge which allows you to do a round trip, but you can also decide to continue the trail through the beautiful Voje Valley. A round trip along the Mostnica Gorge would take around 1,5 hours. The Mostnica Gorge trail is very easy with hardly any inclinations. It can be slippery on the trail though, so wear appropriate shoes. There’s an entrance fee to enter the gorge from Mid-March until the end of October. The entrance fee is used to protect the gorge and keep the area well-maintained.
Adults: €3
Students: €2,50

At the end of the Mostnica Gorge there’s a short uphill trail to an alpine hut where you can eat or drink something.

Photography tip for the Mostnica Gorge: bring a tripod with you and use it. I brought my tripod with me, but I didn’t use it to take photos of the gorge. However, the trail along the gorge is quite dark for the most part and many of my photos came out blurry and out of focus. It’s also the perfect place for long exposure photography, which I wish I had done too. Even though it’s possible to do a round trip along the gorge, you can also extend your hike into the Voje Valley. The Voje Valley is beautiful with lots of grasslands, wildflowers and alpine huts. The mountain backdrops are perfect for taking plenty of photos during your walk through the valley. The valley is created by a glacier thousands of years ago and has the characteristic U-shape, which means there are steep, straight sides and a flat or rounded bottom due to glaciation. For comparison, valleys created by rivers have a V-shape. The walk through the valley is easy and mostly flat. There is hardly any shade so bring plenty of water and sunscreen on sunny days and avoid the warmest hours of the day. Even though the hike itself isn’t hard, the heat can make it hard. At the end of the Voje Valley, before the trail to the Mostnica waterfall, there’s an alpine hut where you can eat or drink something, which I did. After walking for hours along the gorge and through the valley in the burning sun, I was craving for some food. I ordered a delicious goulash soup before continuing the trail to the waterfall. From the alpine hut at the end of the Mostnica Valley, there is a short trail that leads to the Mostnica waterfall. The Mostnica waterfall is 21m in height and even though it’s not the most impressive waterfall I’ve ever seen, it’s definitely worth paying a visit. For quite some time, I was the only one at the waterfall which made it the perfect opportunity to practice my long exposure photography skills. Once you’ve come all the way to the end of the valley, you might as well pay a visit to the waterfall. The entire trail from the start at the Mostnica gorge to the Mostnica waterfall takes around 2,5 hours in one direction. The trail is well-marked, you just have to follow the signs (don’t follow directions on Google Maps, they can be misleading).

Would you like to visit the Mostnica Gorge and Voje Valley during your stay at Lake Bohinj? Let us know in the comments below!

The Most Instagrammable Places at Lake Bohinj

All Things To Do at Lake Bled: A Complete Sightseeing Guide