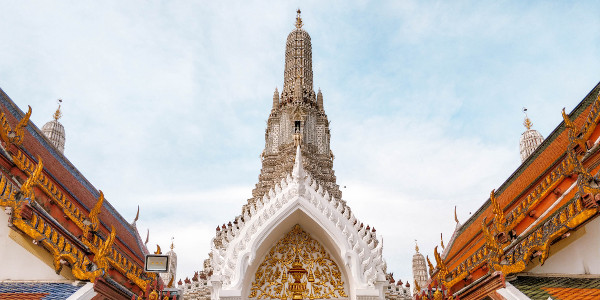 Back in the 15th century, today’s Bangkok was but a village located at the west bank of the Chao Phraya River. Due to its strategic location near the mouth of the river, the village steadily grew in importance. When international trade with China and western merchants increased around 1800-1850, Bangkok’s economy started growing. After the second World War, Bangkok rapidly grew due to investments from the United States and later from Japanese businesses. Right now, Bangkok has a population of over 8 million people, which is 12.6% of Thailand’s total population.

The most well-known temples in Bangkok are located along the Chao Phraya River, which makes it easy to visit them on the same day. These temples are Wat Arun, Wat Pho, Wat Phra Kaew, Wat Prayoon and Wat Mahatat, from which the first three are the most famous. Local ferries will get you from one side of the river to the other. It doesn’t really matter whether you visit early in the morning or in the afternoon, it’ll always be very crowded.

We only visited Wat Arun, as we didn’t really feel like going to the other temples and we thought Wat Arun was the most beautiful of them. Wat Arun is a stunning white temple which shines bright in the sunlight and is full of little details. Besides the main temple, there are also many other halls to see and visit. We loved wandering around the grounds of Wat Arun and taking pictures of every stunning corner we found. If you only have time to (or only want to) visit one temple in Bangkok, we hugely recommend a visit to Wat Arun. Please remember that you have to be dressed properly to visit these temples, so cover your knees and shoulders beforehand. 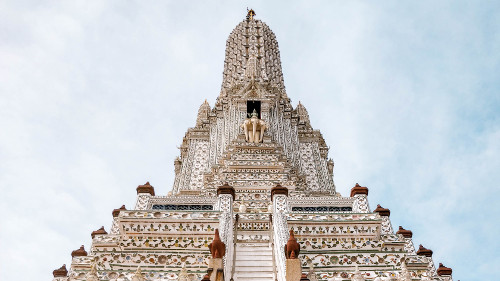 Lumphini Park is a beautiful city park in Bangkok. It was created in the 1920s by King Rama VI. It’s a very nice place to take a break from the hectic city life of Bangkok. Despite the hot and humid weather, you’ll see many people doing various sports in the park. There are even huge groups doing aerobics classes, with teachers, music and microphones included. We were in the park when the clock ticked 6:00 PM and suddenly loud music came from the speakers and everyone just stood frozenly still (and so did we, surprised). After a minute or two, the music had stopped, and everyone went on with their lives. This was all very sudden and surprising to us, but after doing some research, it turned out that this happens every day. At 8:00 AM and 6:00 PM the Thai national anthem is played on every local and national television and radio channel and on speakers in public places (train stations, parks etc.) and government buildings. So when visiting Thailand, be prepared if you find yourself in one of these places at 8:00 AM or 6:00 PM. Be sure to stop what you’re doing for a while and stand up if you were sitting. 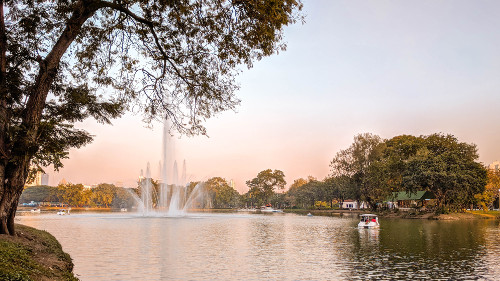 Bangkok is home to many themed cafés and it’s an absolute must to visit a few of them. We spent quite some time visiting the themed cafés we wanted to see, but there are still many more on our list. Click here to read which themed cafés we visited and which ones we’d still like to visit. 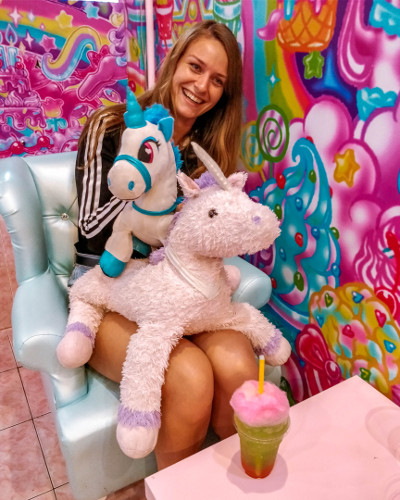 We didn’t really plan on going here but suddenly ended up in Chinatown while walking from Wat Arun to our hotel (which was a very, very long walk). Chinatown in Bangkok is definitely the craziest we’ve ever been to. Every few meters there’s a small stall selling all kinds of dildos, sex tapes, condoms and other sex related toys. There are many shops selling dried goods (we still don’t know whether it was animal-skin or -organs or maybe both), coffins (?) and small, living animals (like chicks), which were with way too many crammed in small cages. Let’s just say it was quite an experience for us westerners having just spent 1.5 months in South East Asia. 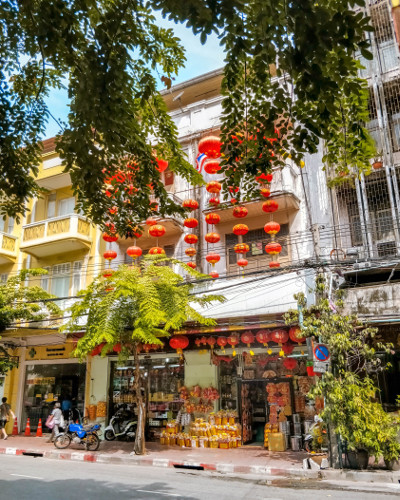 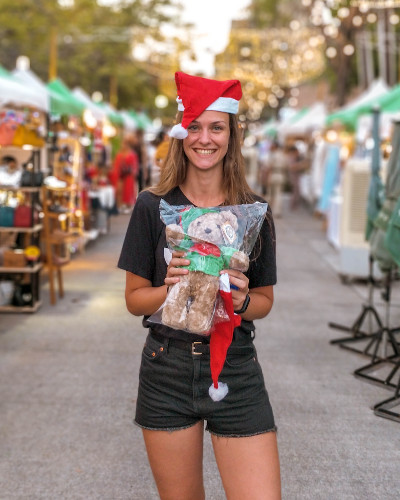 Depending on where you’re staying and where you want to go, the public transport in Bangkok is pretty good. Our hotel was nearby a BTS Skytrain station so it was easy to reach other places that we’re also connected to the Skytrain, the MRT or the regular train as they were well-connected with one another. A major downside to the public transport in Bangkok is that the Chao Praya River area is hard to reach by Skytrain, MRT or regular train. From our hotel, which was near the BTS Skytrain station Ekkamai, to Wat Arun would take between 1,5 to 2 hours by public transport, compared to 35 minutes by car (without traffic). Even though traffic in Bangkok can be pretty bad, we decided to bet on an Uber instead, which turned out fine. If we’d gone with public transport, we would have to take a bus and we’d be in the same traffic anyway. Even though we haven’t tried it ourselves, we wouldn’t recommend taking the bus in Bangkok because of the traffic situation. 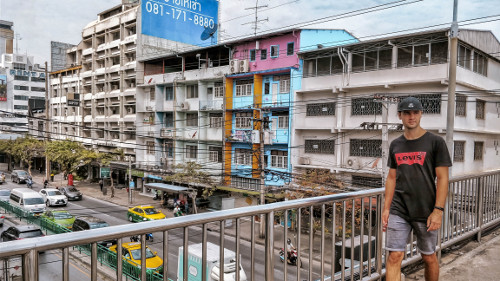 Let us know in the comments below if you’ve been to Bangkok!