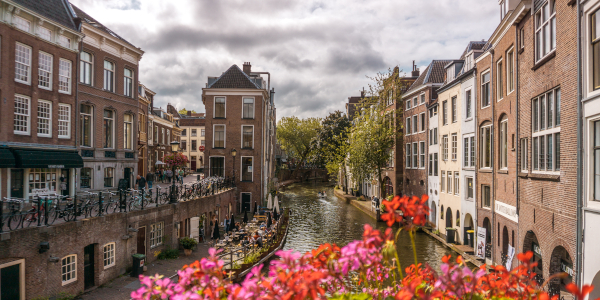 Utrecht is one of the oldest cities in the Netherlands and that means it’s filled with history. In the year 50 AC, the Romans built a fort along the Rhine river which later grew into the city of Utrecht. The remains of the fort are still underground (they haven’t been dug up), but you can admire plenty of historic buildings from the 14th to the 17th century in the city center. Besides that, Utrecht is a fun and beautiful city to visit for the day (or a weekend). Read on to find out about everything Utrecht has to offer!

Utrecht is one the fastest growing cities in the Netherlands, which results in a good mix of old and new buildings. Right next to the train station you can find the shopping mall Hoog Catharijne. Hoog Catharijne was first built in 1973, but it became really outdated and it has recently been renovated. The shopping mall is huge and offers a great variety of stores: clothing stores, electronic stores, (Asian) supermarkets, drug stores, to name a few. Besides that, there are also lots of places to grab a bite or a drink. We love the new and modern design of Hoog Catharijne and it’s the perfect place for shopping, especially on a rainy day. Walk along the canals

Just like in many other Dutch historic cities, there’s a canal running through the city center. The canals in Utrecht are unique in the world because of the wharves and wharf cellars at water level. This creates a kind of a two-story street along the canals: one street at water level and another at ground level. Back in the day (read: the 13th century), the wharves at water level were directly connected to cellars so the trade goods could immediately be stored. Nowadays, the cellars and wharves house shops, restaurants and private residences. It’s possible to walk along the canals at both street and water level. We would definitely recommend doing the latter, because you won’t be able to do this anywhere else in the world! Walking along the Oudegracht, you will see some beautiful historic buildings. Utrecht has a few so-called city castles which are basically castle-like houses from patricians (medieval rich people). Oudaen is one of the well-remained city castles, and you can find it at Oudegracht 99. The building really looks like a mini castle. So pretty! Most of the stores and restaurants are also located along the canals. That makes it the perfect place for shopping and eating. The Dom Tower is the tallest church tower in the Netherlands. Walking through the city center of Utrecht, you probably spotted the tower already. The tower is part of the Dom Church, which is located close to it. The tower and the church aren’t physically connected, because a part of the church collapsed in 1674. Now, you have to cross the street to get from the tower to the church, or vice versa. When the tower was completed in 1382, it was 109 meters tall. During restorations in 1910, the height of the tower increased to 112,5 meters. Even though in the last few years Utrecht is building a lot of towers, it’s apparently an unwritten rule that no building may exceed the height of the Dom Tower. That’s such a pity, because we feel that more cities in the Netherlands need more high-rise buildings. The tower can only be visited as part of a guided tour. Prices are €11 for adults and €5,50 for students. Check this website for the current opening hours and to buy tickets. Fall vibes at the Dom Square

A fun way to explore Utrecht is by boat. We always love boating through the canals in Dutch historic cities. There are multiple possibilities to explore Utrecht from the water. During a group boat tour, you will enjoy 1-2 hours on the water in a large boat together with other people. During the tour you will learn about the history of Utrecht. We haven’t done this in Utrecht, but Rederij Schuttevaer looks like a good company to go with. The boats are covered, so when the weather isn’t as nice it’s still a fun activity. Check their website for prices and availability.

Besides a group boat tour, it’s also possible to rent your own private boat. If you don’t feel comfortable driving a boat, you can also go for a kayak, canoe, water bike or SUP board. We would recommend checking the weather in advance and bringing appropriate clothes, because there’s always a chance of rain in the Netherlands. On the website of the tourist office of Utrecht , you can find multiple companies that offer these services. Utrecht is filled with places to eat. There is so much choice that it might be overwhelming. When the weather is nice, we would definitely recommend having drinks and/or some food at a restaurant with a terrace right along the canal. That’s just the best Utrecht experience. Unfortunately, we don’t have a go-to place for drinks/food right along the canal in Utrecht. But we do have some recommendations for other places to eat.

During our most recent trip to Utrecht, we had lunch at Anne & Max and we loved it. It’s a lovely restaurant that serves breakfast and lunch food. It’s one of those places that serve their breakfast food all-day, which Mika loves (there’s nothing better than having oatmeal at 2 in the afternoon if you ask her). The food and the service at Anne & Max is so good, we can absolutely recommend it! The Croquetten Boutique is a tiny place that serves all different kinds of variations from the typical Dutch “kroket”. We love the concept! They have the most unique versions of croquettes, such as green curry and vegetable filling or Indonesian rendang. If you love Dutch croquettes, you have to try one of the croquettes here too. Their menu changes regularly, so you can try a new one every time you’re in Utrecht! The interior of The Streetfood Club is truly amazing, so we had to check this place out. The place is huge with different kinds of interior settings in different parts of the restaurants. Some parts are like a jungle, while others are completely in pink. Unfortunately, just like many other Instagrammable restaurants, the food and service weren’t that good. The food was dull and overpriced and the staff wasn’t very friendly. It was nice to check it out once, but we wouldn’t go back there. Maybe if they install a pink flower wall, the avocado toast will taste better? De Ontdekking is a little bit out of the city center, but is a lovely place for a coffee and lunch. It’s also the perfect place to do some work on your laptop. It’s close to a faculty of the University of Utrecht, so you can find many students here. The food is good and well-priced and the staff is very nice. This is a good choice for lunch if you’re in the neighborhood. How to Get to Utrecht

Utrecht has the largest train station in the Netherlands. Because of its central location (Utrecht is literally the center of the Netherlands), the trains drive to all directions in the country. There are also a few international train connections, mostly with Germany. This makes visiting Utrecht by train very convenient. The train station is located very close to the city center. To get to the city center, you have to go through Hoog Catharijne which is already a nice experience. From Amsterdam, it takes less than 30 minutes to reach Utrecht. Trains leave every 10-15 minutes from Amsterdam. We can definitely recommend going to Utrecht by train because it’s so convenient!

Parking rates in Utrecht are very high, so we wouldn’t recommend going by car. If you decide to go by car anyway, we would advise parking at a Park and Ride (P+R) just outside of the city center. A P+R ticket in Utrecht is €6 and includes parking for the entire day and getting to and from the city center by public transport for up to five people. There are four P+R locations in Utrecht: Westraven, Berlijnplein Leidsche Rijn, Science Park Uithof and Papendorp.

How Long to Stay in Utrecht

We would recommend going to Utrecht for one day or a weekend. Staying a weekend in Utrecht is perfect if you would like to do some sightseeing as well as shopping. That way you can spend one day sightseeing and one day shopping without becoming overwhelmed. If you want to do either of those, one day is enough. Have you been to Utrecht or would you love to go there? Let us know in the comments below!

One Day in Groningen: All Things To Do

One Day in Gouda: All Things To Do

One Day in Haarlem: All Things To Do