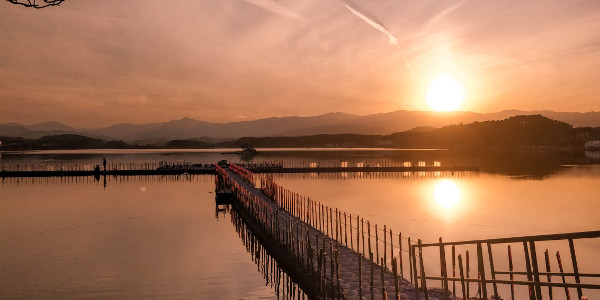 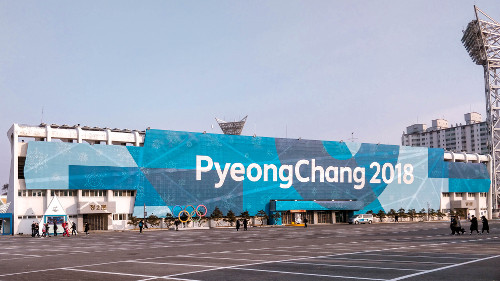 A few months earlier we bought tickets for the Men’s 10,000m speed skating event on February 15th. When we arrived in the afternoon (on the 14th) in Gangneung, we decided to see whether there were still tickets available for the Women’s 1,000m speed skating event that night. Fortunately, one of the stewards of the Olympics was so kind to let us leave our luggage in their break room at the station, as all of the lockers were occupied. We left to the ticket box at the Gangneung Oval Stadium as we had to buy the tickets there. (These were so expensive! If you ever go to the Olympics, buy tickets in advance, haha.) We were pretty early and wanted to walk around the Olympic Park to experience the ambience, but unfortunately there was a very strong wind and therefore all the activities, shops and restaurants in the Park were closed. So that left us with only one option: go inside the stadium and look for some food. 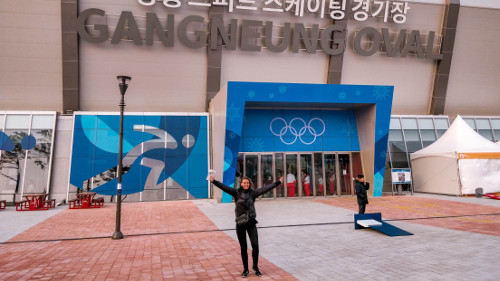 The Gangneung Oval where all the speed skating events were held

The speed skating event was amazing and we were so glad that we bought last-minute tickets. As we’re Dutchies, we cheered for the Netherlands and we were so happy we could witness Jorien ter Mors win the gold medal that evening. She recorded an incredible time and even set an Olympic Record. The silver and gold medal were won by two Japanese women. The ambience in the stadium was amazing and we were so surprised at seeing so many Dutch people who flew all the way to Korea to be at the Olympics! 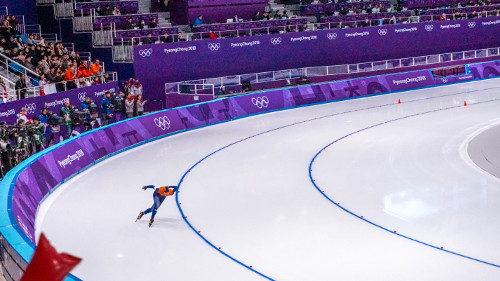 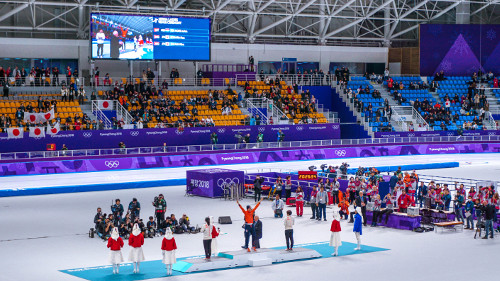 The winners of the women's 1000m speed skating event

It was very late at night and we took the last bus to our Airbnb. We usually book entire apartments at Airbnb, but it was quite a struggle to find accommodation during the Olympics in Gangneung and the only thing we could find was a room in someone’s house. We had the loveliest host we could wish for and it was no problem at all that we checked-in after midnight, she even made hot ginger tea for us to warm ourselves up. The next morning our host served us a delicious breakfast. As we were staying very close to the beach, we wanted to see what Korean beaches are like. (It turns out that beaches are no different in Korea, haha.) We packed our camera and drone and headed to the beach. It was almost freezing, but it was a nice sunny morning and the area looked amazing! 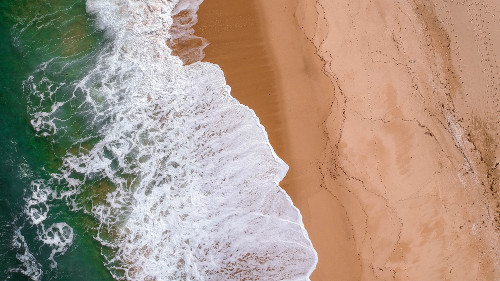 In the afternoon, we wanted to see whether we could buy tickets for the Holland Heineken House that day. The tickets on the internet were already sold out, but we heard that tickets often become available during the day. The House opened at 15.00 but we were told there were no tickets available yet and they didn’t know whether there would be any. After a while we decided to leave and head to the Olympic Park to spend the afternoon there. While we were on the bus, Joop checked the website of the Holland Heineken House once more and all of a sudden there were some tickets available! We quickly got off the bus (luckily, it wasn’t driving yet), bought the tickets and went back to the Heineken House. A ticket is valid throughout the whole day, so you’re allowed to walk in and out of the House. The place was still very empty as most people come either after the event or to watch the event. We ate some ‘bitterballen’ and drank a coke and then went to the stadium to watch that night’s event: Men’s 10,000m speed skating. 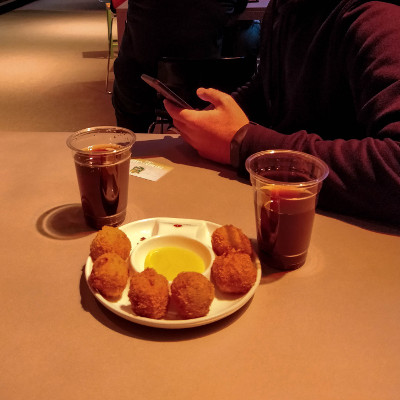 The stadium was even more packed than it was the day before and there were lots of Korean people attending the event. We loved to see the passion of the Koreans for the speed skating sport and how they often cheered for their favorites of other countries even. Everyone expected this to become the evening of Sven Kramer, but unfortunately it didn’t. Luckily for us, Jorrit Bergsma won the silver medal and it still was an amazing evening. 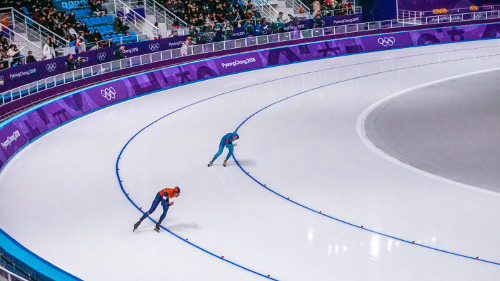 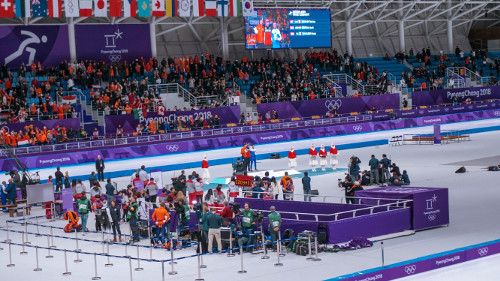 The winners of the Men's 10000m speed skating event

After the event, we went back to the Holland Heineken House to celebrate Jorrit Bergsma’s silver medal. The party was really going on in the House. There was a DJ first and later also a performance by Dutch artist Van Velzen. More than just Dutch people came to the Holland Heineken House. There was a huge group of Canadian girls, but also lots of people from different countries. It turns out the Holland Heineken House is known as one of the best places to party after the events. Jorrit Bergsma came on stage to celebrate with everyone, which was lots of fun and definitely the highlight of the evening. We took a taxi back to the Airbnb in the middle of the night, which luckily was not a problem for our kind host. 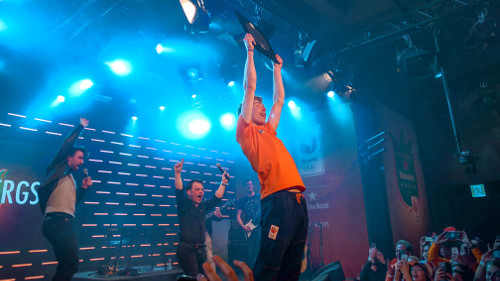 The next day was our last day in Gangneung. We were exhausted after these few days of running around and little sleep. We went to the station and drank a coffee while booking our next accommodation in Seoul. There were no seats available anymore on the next couple of trains back to Seoul so we bought standing tickets, which isn’t that comfortable on a 2-hour train ride but we survived. 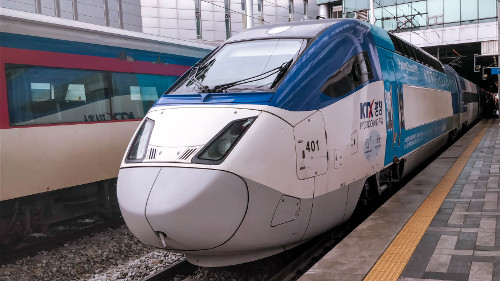 Our time in Gangneung was amazing and we were so happy we could experience the Pyeongchang Winter Olympics in Korea. It felt like a once-in-a-lifetime opportunity and even though it was pretty expensive, we’re super happy we did it!

Have you ever been to the Olympic Games? Let us know in the comments below!