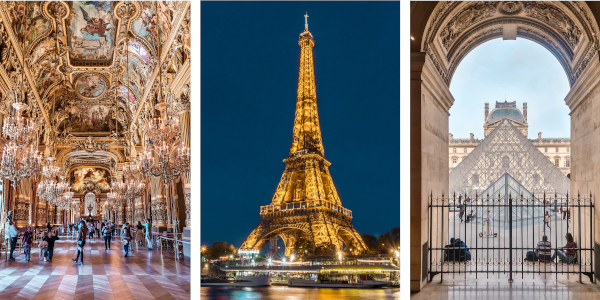 If you ask us, Paris is always a good idea! The French capital city has so many things to offer and to see. Of course, you can’t miss the iconic sightseeing spots such as the Eiffel Tower, the Louvre Museum and the Arc de Triomphe. But have you ever heard of Grande Mosquée de Paris with one of the most stunning gardens we’ve ever seen? In this blog post, we’re sharing the best things to do in Paris so you can easily plan your trip to the city of love! The collections of the Louvre started as acquisitions of paintings and other artworks by the monarchs of France. After decades of proposals to create a public art gallery in the Louvre Palace, the Louvre finally became a public museum during the French Revolution. After the imprisonment of Louis XVI in 1972, the royal collection in the Louvre became national property. The museum opened its doors to the public on 10 August 1793. As it was our first visit to the Louvre, we finally witnessed Mona Lisa, Leonardo da Vinci’s masterpiece, in real life. To be honest, we had no idea what to expect. To see Mona Lisa up close, you have to wait in line. At the front of the line, there’s a big group of people in front of the painting, all trying to take photos of and selfies with Mona Lisa. As the painting is very small (77cm x 53 cm), you can’t still really see it when you’re at the front of the line and have to push yourself through the group of people to get a somewhat-good view of the painting. We had never experienced anything like this in a museum. It’s a beautiful painting, but to be honest we had no idea why the Mona Lisa actually was this popular. After doing some research, we discovered that the painting’s fame and popularity comes from a theft in 1911. The thief Vincenzo Peruggia believed that the painting should belong to Italy. The theft gained a lot of publicity and served as an inspiration for multiple films, operas and songs. Mona Lisa has been on permanent display at the Louvre in Paris since 1797. Besides the Mona Lisa, the Louvre has 615.797 objects in their collections. The collections range from all periods of time, from Egyptian antiquities and Roman sculptures to royal objects of art and Renaissance paintings. The Louvre Palace is a huge building and if you want to see all the collections, you have to be at the museum when it opens in the morning or you won’t have enough time to see it all. We visited the Louvre in the afternoon and entered around 14:30 and I don’t think we’ve even seen half of the museum. We’d recommend doing some research in advance and look up which artworks you want to see, so you can plan your route through the museum. Opening hours of the Louvre Museum
Monday until Wednesday, Saturday & Sunday: 9:00-18:00
Friday: 09:00-21:45
Closed on Tuesdays, January 1st, May 1st and December 25th.
Ticket price: €17
We’d recommend buying tickets online to ensure entry on your preferred time slot. You can buy tickets on the website of the Louvre. The Grande Mosquée de Paris is a beautiful mosque with an even more beautiful garden. The mosque was built between 1922-1926 and was inspired by Hispano-Moorish works of the Middle Ages. The mosque is a tribute to the Muslim soldiers who died for France during the World War I. The heart of the mosque features a gorgeous garden, a peaceful oasis in the bustling city of Paris. Every May, the garden becomes even more magical. There are a lot of wisteria vines in the garden, covering the garden with purple rain. If you happen to be in Paris during wisteria season, you absolutely can’t miss visiting the Grande Mosquée de Paris!

The Best Wisteria Spots in Paris The Eiffel Tower is the most visited monument with an entrance fee in the world. There are three levels for visitors. The top level is located at 276 meters and the second floor is located at 116 meters. The first two floors have restaurants and souvenir shops and there’s a champagne bar on the top floor to salute the good view. Lift tickets up to the second floor are €17,10 per person, lift tickets up to the top floor are €26,80 per person. Tickets are available at a reduced price if you take the stairs to the first two floors. The Eiffel Tower at night

Even though the views from up the Eiffel Tower are amazing, you can’t see the tower itself as you’re standing on it. Luckily, there are a lot of spots in Paris from where you can admire the Eiffel Tower. We’ve listed a lot of Eiffel Tower photo spots in our most Instagrammable places in Paris post. We can especially recommend having a picnic at Port Debilly along the Seine, while watching the sun set and the tower illuminate. At night, the Eiffel Tower sparkles every hour (at the top of the hour), which is a beautiful thing to watch. Another fun perspective is watching the Eiffel Tower from metro line 6 between the stations Passy and Pont de Bir-Hakeim. The Arc de Triomphe might be the second most famous monument in Paris, after the Eiffel Tower of course. The Arc de Triomphe was built to honor those who fought and died for France during the French Revolution and Napoleonic Wars. The names of all French victories and generals are inscribed on the inner and outer surfaces of the arch. Construction of the arch took place between 1806 and 1836 and the final costs were estimated to be the equivalent of €65 million (in 2020). Beneath the Arc de Triomphe is the Tomb of the Unknown Soldier from World War I as well as an eternal flame that burns in memory of the dead who were never identified in both world wars. The Sacré-Coeur is located on top of a hill in Montmartre, almost 200 meters above the level of the Seine. This location was chosen to make the church visible from many parts of the city. Construction of the Sacré-Coeur took place between 1875 and 1914. Overall, the church is built in an interpretation of Romano-Byzantine architectural style. Some elements, such as the domes, are Neo-classical. The design choice was a reaction to the neo-Baroque style of Palais Garnier and other Napoleon III styled buildings in Paris. Prepare to climb a lot of stairs to reach the Sacré-Coeur. There’s also a funicular that takes you up from Place Saint-Pierre to the church. The funicular ride lasts 1 minute and 30 seconds and a one-way ticket is €1,90. The funicular is open daily from 06:00 until 00:45.

Because the Sacré-Coeur is built on top of a hill, the views from the church over Paris are amazing. You can watch the views over Paris from the platform in front of the church, but it’s also possible to visit the Dome of the church. After climbing 300 steps, you’re greeted with a 360 degree view of Paris. View of Paris from the Sacré-Coeur

Petit Palais was built for the 1900 Universal Exposition by French architect Charles Girault. Since 1902, Petit Palais has housed the Musée des beaux-arts de la ville de Paris, a fine arts museum. Even though Petit Palais is smaller than its across-the-street neighbor, the Grand Palais, it’s still an incredibly beautiful building. Your attention is immediately drawn to the central entrance archway with the huge golden gate. Once inside you’re greeted with natural light coming from the large windows as well as beautiful ceiling decorations and frescoes. There’s a courtyard in the heart of Petit Palais. The courtyard is surrounded by a covered gallery with coupled columns. The garden itself is filled with a lot of greenery and cherry blossom trees during the right season. The museum’s restaurant is also located in the courtyard with an outdoor seating area in the lush garden. It’s the perfect place for a cup of coffee with a macaron.

Opening hours of Petit Palais
Tuesday-Sunday: from 10:00 until 18:00
Closed on January 1st, May 1st, July 14th and December 25th.
There’s no entrance fee to the permanent collection. Check the entrance fees for the temporary exhibitions on the website of the Petit Palais. The courtyard of Petit Palais

Inside Palais Garnier, you’re immediately mesmerized by said grandeur of the opera house. There’s not a single spot left that hasn’t been decorated. The area of the Grand Staircase features beautiful ceiling paintings, stunning balconies and of course the Grand Staircase itself. The Grand Staircase in Palais Garnier

The Grand Staircase leads to the Grand Foyer which is even more mesmerizing. In our opinion, the Grand Foyer looks like a smaller version of the Hall of Mirrors in Versailles Palace. It’s an absolutely gorgeous hall that will probably leave you speechless. From the Grand Foyer, you can access the balconies overlooking Avenue de l’Opéra. The Grand Foyer in Palais Garnier

Opening hours of Palais Garnier
Daily: from 10:00 until 17:00
Closed on days with afternoon performances, exceptional closures, January 1st, May 1st and December 25th.
Entrance fee: €14
Check the website for current opening hours and to buy tickets.

Galeries Lafayette is a French department store chain. When you’re in Paris, you can’t miss visiting their flagship store on Boulevard Haussmann. This huge store offers a wide variety of high-end beauty and fashion brands. But even if you’re not interested in shopping, Galeries Lafayette Haussmann is a must-visit. The art nouveau architecture of the building is stunning. There’s a giant stained-glass dome in the heart of the department store. The best view of the dome is from one of the beautifully designed and decorated balconies. On top of that, there’s a rooftop terrace offering amazing views of Paris, including views of Palais Garnier and the Eiffel Tower.

Opening hours Galaries Lafayette Haussmann
Monday-Saturday: from 10:00 until 20:30
Sunday: from 11:00 until 20:00
Entrance to the department store and the rooftop terrace is free. We can’t guarantee that you can leave Galeries Lafeyette empty-handed though. The dome and balconies in Galeries Lafayette Haussmann The view from the rooftop of Galeries Lafayette Haussmann

Jardin du Luxembourg is a beautiful city park in the 6th arrondissement of Paris. Jardin du Luxembourg was commissioned by Marie de’ Medici in the 17th century, who was regent for minor son King Louis XIII at the time. She was originally from Florence and her plan was to build a park in the style she had known as a child from Florence. The original garden was 8 hectares in size, but in 1630 Marie de’ Medici bought additional land and enlarged the garden to 30 hectares. It was during this time that the Medici Fountain was built. After Marie de’ Medici’s death, the garden went through a series of owners and underwent multiple reconstructions. Since 1848, the garden has been home to a large number of statues that are scattered throughout the grounds. Between 1864 and 1866, the Medici Fountain was extensively rebuilt. Jardin du Luxembourg is a lovely place to stroll around on a sunny day. There are a lot of chairs where you can relax and enjoy the atmosphere. The Grand Bassin is located in the heart of the garden and people often sail RC boats in the pond. There’s also a kiosk where you can grab a coffee (to go). Have you been to Paris or is it still on your travel bucket list? Let us know in the comments below!

Visiting the Cherry Blossoms in Parc de Sceaux near Paris

The Best Wisteria Spots in Paris