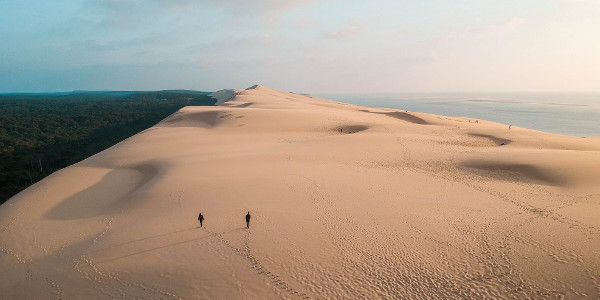 Dune du Pilat is one of our favorite spots along the Atlantic Coast in France. With its 110 meters above sea level, Dune du Pilat is the tallest sand dune in Europe and consists of about 550 million cubic meters of sand. Even though Dune du Pilat attracts one million visitors per year, it still feels like a hidden gem. It’s a really a unique place and should be on everyone’s bucket list!

Dune du Pilat is located between the Atlantic Ocean and a huge pine tree forest. As of right now, the dune is 2,9 km long (north to south), 616 meters wide (west to east) and 110 meters high. The dune is constantly in motion though. Every year the dune moves around 1 to 5 meters towards the forest in the east. Fun fact: the official spelling of the dune is Dune du Pilat, but it’s often misspelled as Dune du Pyla. Right next to the dune in the north, there’s a village called Pyla sur Mer, which probably led to the use of Dune du Pyla and caused the confusion about the dune’s name. Pilat however originated from the Gascon word Pilat, which means heap or mound. Gascon is the French dialect spoken in the region.

As Dune du Pilat is 110 meters high, be prepared to walk up some stairs to get to the top. There’s no entrance fee, just a parking fee if you come by car. here are a few souvenir shops and a snack bar next to the parking area, but they’re only open in July and August. Dune du Pilat is open all year round. In July and August, many people are on vacation in the area and visit the dune. These are by far the most crowded months. Even though it can get crowded in the high season, it never feels too crowded as the dune is huge. In June and September, the temperatures are still mild yet there are way less people. If you dress appropriately for the weather, Dune du Pilat is a beautiful visit anytime of the year! The best time of the day to visit Dune du Pilat is during sunset. Seeing the sunset from up high is truly magical. During summer, many people come to watch the sun set in the sea. You’ll have no problem finding a spot because of the vastness of the dunes. If you’re going there off-season, you’ll run into only a few people especially on weekdays. Make sure to check the sunset times and weather before going. It’s always windy at the top so make sure to bring an extra jacket or blanket, even when the temperatures seem high. Dune du Pilat is a famous paragliding spot and you’ll always see some people paragliding off the dune. We can’t blame them because the views are amazing and apparently paragliding conditions are great. There are multiple paragliding schools in Pyla-sur-Mer that can help you with organizing a paragliding tour. If you’re into paragliding, this is a great spot to do it! If you don’t like paragliding, but still would love to see Dune du Pilat from an aerial perspective, bring a drone! Bearing the drone regulations in mind, we wouldn’t recommend flying the drone during peak season (July and August) as there are simply too many people at the dune, especially during sunset. You wouldn’t want to disturb other people or even worse: flying into a paraglider with the drone. If you’re there in summer, go early to avoid the crowds. If you’re going offseason there won’t be many people around and you can fly even during sunset without anyone really noticing it. It can get very windy at top of the dune though, so be aware of that. Always be respectful of other people, the nature and the environment when flying a drone. Never fly without checking the local drone regulations, you don’t want to get yourself in trouble! How to get there

Dune du Pilat is close to the city of Arcachon and the Arcachon Bay (Bassin d’Arcachon). From Bordeaux, it’s approximately a 50-minute drive to Dune du Pilat. Be aware of traffic jams in summer. We always visit the dune when we’re camping in Montalivet-les-Bains. It’s around a 2-hour drive from Montalivet to the dune. There’s a parking fee when visiting the dune by car. This fee is a contribution to the maintenance and preservation of Dune du Pilat. There’s no entrance fee.

The closest train station is Arcachon, which has a good connection with Bordeaux. It takes 50 minutes by TER train to get from Bordeaux to Arcachon. From the Arcachon train station, you can take Bus Line 1 in the direction of Plage de la Salie and get off at the Pilat dune stop. The bus ride takes around 25 minutes and drives all year round. Dune du Pilat is perfect to visit on a day trip from Bordeaux.

If you’re staying in the area, consider renting a bicycle to get to Dune du Pilat. The Atlantic Coast area is filled with cycling paths which makes it a perfect place to cycle around! Another amazing place worth visiting in the area is Arcachon Bay (or Bassin d’Arcachon in French).

Have you been to Dune du Pilat or is it still on your bucket list? Let us know in the comments below!

The Most Instagrammable Places in Bordeaux

[Things To Do in Arcachon Bay: A One-Day Itinerary][arachon bay]

The Most Instagrammable Places in South West France

Camping in South West France: A Summer Getaway in Montalivet-les-Bain