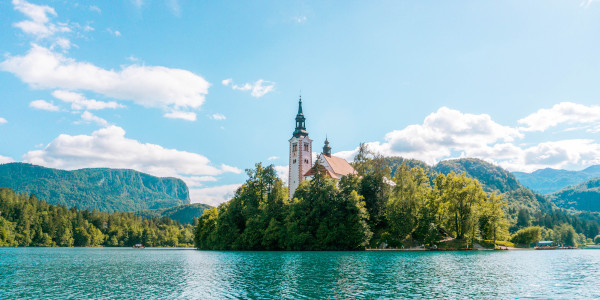 Bled Island is the picturesque island in the middle of Lake Bled. This island is exactly what makes Lake Bled a fairytale-like destination. The greenery and the pretty church with the orange roof just make it look so dreamy. The best thing about the island is that you can visit it too. There is not that much to do there as it’s very small, but it’s still a very nice activity. In this blog post, I’m sharing everything you need to know about visiting Bled Island.

Slovenia is the first European country that officially ended the pandemic on 14 May 2020. Please note that precautions still apply to help prevent the spread of the coronavirus. Follow local instructions and rules. Check the website of the Slovenian tourism board for more information.

Read more: All Things To Do at Lake Bled The Church of the Mother of God

The island actually has quite a rich history. The Church of the Mother of God and the bell tower are the main attractions on the island. There used to be an ancient Slavic temple dedicated to the pagan goddess standing at the same place as the current church was built. After 745, the temple was replaced by a church dedicated to the birth of Mary. The current church on the island was built in the 17th century and decorated with remains of the Gothic frescos from around 1470. Inside the Church of the Mother of God

Inside the church, there’s a wishing bell that visitors can ring. Legend says that a young widow collected all her silver and gold to cast it into a bell. She wanted to honor the death of her husband by placing this bell in the church on Bled Island. Unfortunately, the bell never arrived on the island, as it sank on its way there during a severe storm. The widow sold all her possessions and left to a monastery in Rome. After her death, the Pope instructed to build a new bell dedicated to the widow from Bled. This is the bell in the church right now. The pope blessed the bell and gave it a special power of granting one wish to those who ring it.

Despite the promise of a granted wish, I didn’t ring the bell myself. There was a pretty long line and I didn’t feel like waiting. Instead I just went up the bell tower after visiting the church.

Next to the church, there’s a 52m high bell tower. You can climb the stairs to the top. From there you can look outside the window for a unique view over the island. View from the bell tower

On the island, there’s a baroque stairway with exactly 99 steps leading to the church and the bell tower. The stairway was built in 1655 and is recognizable from a distant. Weddings are held regularly on the island and it’s a tradition for the groom to carry the bride up the 99 stairs before ringing the bell and making a wish. This is said to bring good luck to the newly wed couple. Pletna boats under the baroque stairway

In the Potica House, you can try various types of “potica”, a typical Slovenian pastry. There are potica cakes with different kinds of fillings, such as tarragon filling (traditionally served during Easter), nut filling (traditionally served during Christmas) and bacon fillings. Another special potica cake is one with hazelnut filling and dried figs that grow on the island. I have to be honest and notice that I completely missed the Potica House when I was on the island. I think I was so focused on getting an ice cream that I couldn’t see anything else, haha.

The highlight of my visit to Bled Island was the ice cream I had, which was so good. I particularly liked the fact that some of the flavors are typical for Lake Bled, like cream cake, wishing bell and bell ringer. The yummy flavors and the stunning scenery just made it perfect. You can find the ice cream stand next to the top of the baroque stairs. I don’t know whether the ice cream stand is open all year round, I wouldn’t be surprised if it’s closed in the winter months. How to get to Bled Island

The most common way to get to Bled Island is by taking one of the many pletna boats. A pletna is a wooden boat with a similar shape to Italian gondolas. The pletna oarsmen are called platnars, and they use two oars to navigate the boat through the lake. The pletnars date back to 1740 and it is a restricted profession. You can take a Pletna boat from the villages Bled and Mlino, and from the rowing center. I took the boat from Bled and it took 30 minutes to reach the island. Mlino and the rowing center are both closer to the island and from there, the boat ride takes around 15 minutes. We had 40 minutes on the island before the boat returned to Bled town. I paid €15 for my seat on the Pletna boat.

There are multiple stands along the lake where you can rent a rowing boat, which is €20 for one hour. With a rowing boat, you have complete freedom how long you want to stay on the island. Rowing in the lake is also just nice activity in general on a sunny day. If you’re traveling alone (like I was), it’s cheaper to hop on a Pletna (and less exhausting). A rowing boat and Pletna boats

It’s also possible to swim to the lake. If you’re swimming from the beach near the camping site at the western part of the lake, it’s not even that far. You need to be wearing clothes to be allowed to enter the church though, so keep that in mind.

Entrance to the island is free of charge. If you’re going by pletna, you of course have to pay a fee to the oarsman. There’s a fee to enter the church and bell tower, which is is €6 for adults and €4 for students. I hope I’ve provided you with all the information you need to plan your visit to Bled Island. Is Lake Bled on your bucket list? Let us know in the comments below!

All Things To Do at Lake Bled

The Best Things To Do in Ljubljana