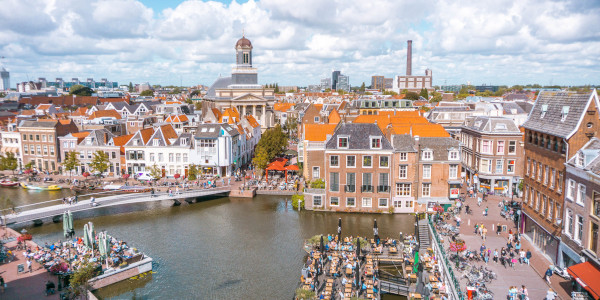 A day trip from Amsterdam

Leiden is a lovely city with a rich history. It’s only a 40-minute train ride from Amsterdam, which makes it perfect for a day trip. Leiden is a typically historical Dutch city with lots of historical buildings and of course canals. Leiden is a university city and Leiden University is the oldest university in the Netherlands. In this post we’re sharing all things to do on a day trip in Leiden.

Please note that a lot of places mentioned in this blog are currently closed because of the pandemic. We don’t advise anyone to travel when it’s not safe. Use the information in this blog to plan future trips.

Map from Wanderlog, a vacation planner on iOS and Android

Molen De Valk is a scaffolding windmill built in 1743. The windmill is currently a museum. We loved watching the windmill from across the pond, which is a perfect photo spot. We didn’t visit the museum, but it’s very interesting to see the inside of a Dutch windmill if you’ve never seen one before. Kort Galgewater is a historical harbor with beautiful old boats and buildings. This Museum Harbor (museumhaven in Dutch) features authentic-looking, former commercial vessels from before 1940. It’s a lovely area to walk around and to take some photos of the historic boats. Many of the buildings surrounding the harbor are historic warehouses. We particularly liked the old building featuring lots of red shutters. Next to the harbor you can find Molen De Put which is a typically Dutch windmill. This windmill is a replica from a windmill dating from 1619 that burnt down in 1640. This replica was built in 1987. The bridge next to the windmill, the Rembrandtbrug (Rembrandt Bridge) is also a replica dating from the same time period and was reconstructed in 1983. The bridge is named after the painter Rembrandt van Rijn who lived close to the bridge. From the bridge you have a beautiful view of the windmill, and it’s also a lovely spot to take photos.

The windmill is open for visitors on the first three Saturdays of the month. The miller, assistants and mill guides can tell you more about Molen De Put. When there’s enough wind, the mill will grind wheat to produce flour. You can buy flour grinded by the windmill and other souvenirs during your visit to Molen De Put.

Opening hours:
Every first three Saturdays of the month: 11.00-16.00
Check their website for an overview of the opening days. As every historical Dutch city, Leiden has many canals. It’s lovely to wander around the canals and admire the beautiful old buildings along them. We loved the canal Steenschuur and the area. The Steenschuur canal was dug in the 13th century and is possibly named after a stone barn in the area, but it’s also possible that it’s named after a place that produced or stored stone. The first residential buildings surrounding the canal were built in the first half of the 14th century. After the expansion of the city walls of Leiden in 1389, Steenschuur became a popular place for the wealthy inhabitants. This resulted in the construction of large and majestic buildings.

A gunpowder explosion in 1809 completely damaged most of the buildings along the Steenschuur canal. The gunpowder explosion had a huge effect on the cityscape in this part of Leiden. After the explosion, the Kamerlingh Onnes Building was built on top of a small ruin along the Steenschuur canal. This building used to be a physics laboratory, but it currently houses the law faculty of Leiden University. The area surrounding the Oude Rijn river is a lovely area with lots of greenery, pretty houses and pretty boats. We loved walking around this area and taking a photo with the Kerkbrug (Church Bridge) in the background. The Kerkbrug is a cast iron drawbridge and was constructed around 1867. Fun fact: the Kerkbrug is one of the few remaining bridges that has to be opened by hand. Leiden used to have eight city gates and, together with the Morspoort, the Zijlpoort is one of the last two remaining city gates. The gate was constructed in 1667 in classicist style. It’s a beautiful piece of history and a lovely photo spot as well. Besides all the historic sightseeing spots, Leiden is also a great city for shopping. Leiden offers a good collection of shops and the shopping area isn’t too extensive. You can also find lots of cafés in the shopping area where you can have a nice cup of coffee or lunch. The top floor of the Hudson’s Bay has a nice rooftop terrace with a beautiful view over the city. The rooftop is part of a self-serviced café called La Place. Unfortunately, Hudson’s Bay is closed as of December 2019 and La Place decided to close its doors too. We don’t know about future exploitation plans for the building at Aalmarkt 22, but when it’s open again it’s absolutely worth it to check the rooftop view. Everything in Leiden is within walking distance and it’s easiest to get around by foot. If you don’t want to walk, there are also buses driving in the city.

How to get to Leiden

From Amsterdam, the easiest way to get to Leiden is by train. The train ride takes 40 minutes and there are multiple trains leaving every hour. Leiden is also well-connected to other big cities in the Netherlands such as Rotterdam and The Hague. We hope we’ve inspired you to visit the historic city of Leiden during your stay in the Netherlands. Have you been to the Netherlands or is it on your bucket list? Let us know in the comments below!

10 Amazing Nature Places to Visit in the Netherlands