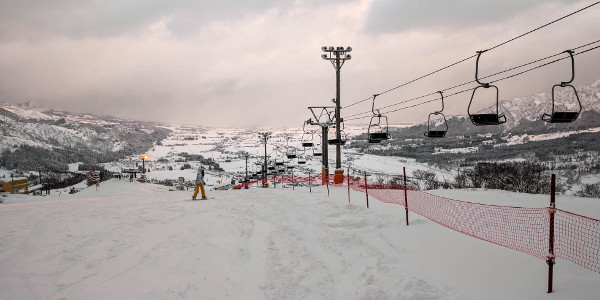 One of our plans on our Asia trip was to go snowboarding in Japan. The choice of ski resorts in Japan is huge. After doing thorough research (mostly on powderhounds.com), we decided to go to Ishiuchi Maruyama.

Ishiuchi Maruyama is easily accessible by bullet train from Tokyo. The train ride from Tokyo Station to Echigo-Yuzawa takes 90 minutes. From Echigo-Yuzawa there are multiple buses you can take to the ski resorts in the area. There is a tourist information desk available at the station where they can help you getting to the right ski resort. They even speak some English. 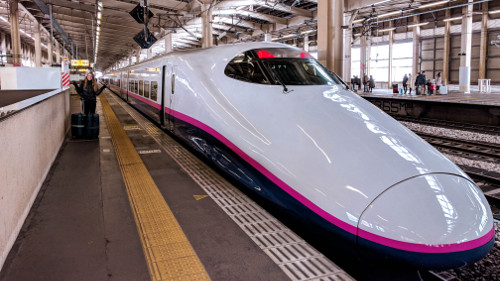 We booked a hotel right at the bottom of the slope, which was very convenient. We arrived at our hotel at the end of the afternoon. Even though the Ishiuchi Maruyama ski resort is open every night, we decided not to go snowboarding that night as we were very tired from the travel day, and the weather wasn’t great. We rented all our snowboarding gear at the hotel and were also able to buy the tickets for the ski resort for multiple days there. Supposedly it is a bit cheaper to buy your skiing tickets at your hotel compared to the ticket desk of the ski resort.

Please note that it is difficult to get around in the village without a car. We had to go to a supermarket for some post-skiing snacks, and it was quite the expedition. While the 7-Eleven is only a 15-minute walk, it becomes a lot longer when it is snowing heavily, and you have to wade through half a meter of fallen snow. So, it’s best to bring anything you might need from a supermarket with you right away. There’s also a very small shop at the train station which could be sufficient, depending on your needs. Also, if you plan on having dinner in a restaurant in the village instead of on the slopes, you might want to check its location with respect to your hotel. Or not, if you’re in for an adventure! 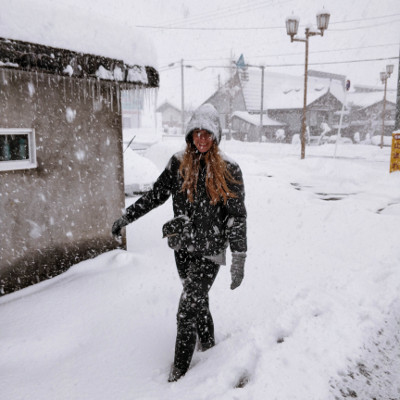 We had never seen so much snow!

The next morning was our first day on the slopes. We got up very early to be on the slopes when they opened at 8 am. The weather was completely different than what we were used to when snowboarding. In the European mountains (Austria, France and Italy), the weather is usually very good with blue skies and lots of sun. Sometimes it’s even so hot that you don’t need to wear a jacket, and you need to wear ski goggles because of the sun’s reflection. However, in Ishiuchi Maruyama, there were clouds on the mountain constantly, that we were literally snowboarding inside of, which led to limited visibility. On top of that, snow storms were regular, sometimes they were so heavy that everyone on the slope had to stop skiing because of the hard winds and near-absence of visibility. It was often difficult to see much more beside white snow. Because it was snowing so often during the day, there was lots of powder snow which many people like a lot. 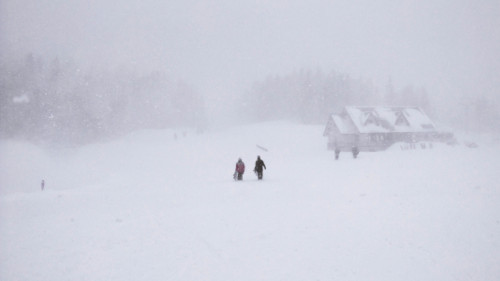 The slopes are in good condition and there are slopes for any level of experience. All the ski lifts have seats. There are no tow lifts. There are lots of restaurants on the slopes, with a huge variety in prices. We drank a hot chocolate and a milk tea in an expensive restaurant which cost us JPY 2000 (± €15,40). Luckily, there was another restaurant where you could get two plates of food and drinks for the same price. We decided to stick to the latter restaurant, where the staff was very nice as well! 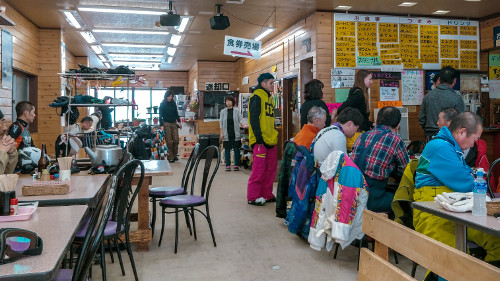 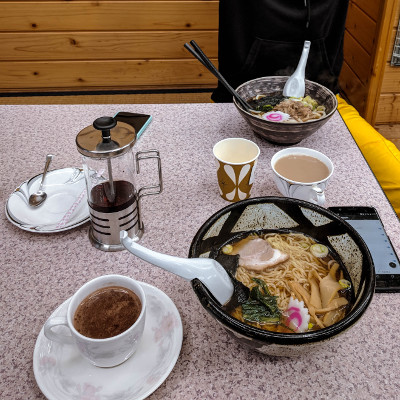 Japanese food and winter sports are a very good combination

The ski area of Ishiuchi Maruyama is not that big but the top of the mountain is connected to Gala Yuzawa Ski Resort which in turn is connected to Yuzawa Kogen. You can buy a pass to all three ski resorts, which we did, but we only went down one slope of Gala Yuzawa Ski Resort. A huge advantage of Ishiuchi Maruyama is that the slopes are open at night until 10 pm. During our stay there, the weather was a lot better in the evening and the slopes were mostly uncrowded. We loved night-snowboarding a lot! 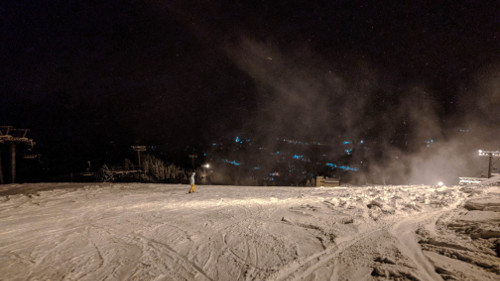 We traveled very conveniently to Ishiuchi Maruyama by bullet train (or Shinkansen). The bullet trains in Japan are the fastest and most reliable way of traveling trough Japan. The bullet trains can even take you up the mountains into ski resorts. When you’re visiting multiple destinations in Japan, the Japan Rail Pass might be a great choice for you. The JR Pass offers unlimited rides on JR trains (including the Shinkansen) for one, two or three weeks at a very affordable price. Check out this website for current prices and to book your JR Pass.

Did you ever go snowboarding in Japan or is it on your list? Let us know in the comments below!

3 days in Kawaguchiko: The best photo spots of Mt. Fuji